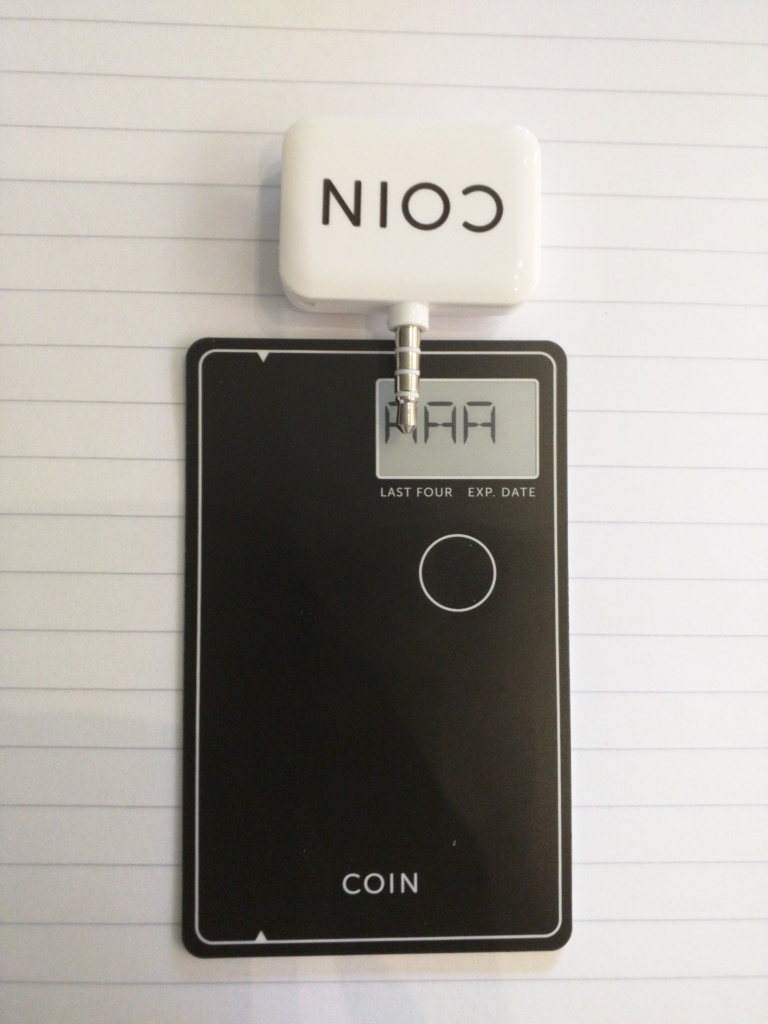 Now that we have chip and pin, it’s really only useful for gift or rewards cards where your liability might be limited.

You put the swiper in your phone’s headphone slot, then swipe cards into it. Even your driver’s licence can go in.

Manual entry did not work for me.

I don’t like that the card cannot be locked. It stays unlocked for use as long as your phone with the coin app is around.

Have a chip and pin debit card instead.

Line your wallet with tin foil.

My nephew and I are alike. We both love gadgets. Especially electronic ones. he texted me via Facebook the other day and asked me what I thought about this thing called The Coin.

My first thought was ‘oh no this is some scheme I heard about on the Chinese equivalent of Facebook called weibo and the darn kids got their money stolen and it was very sad…’
but then I watched the video and I’m intrigued.
https://onlycoin.com/

It looks pretty slick, and at $55 for about two years of use it might pay for itself in convenience at about $2 per month. It’s mostly about the coolness factor though. Wouldn’t you just love to whip that thing out at a club and be like “yeah I’m from the 22nd century. Set phasers to cookie dough!”

Some have touted it as getting rid of the George Costanza wallet but I think he just had pictures and gum and I don’t know what else in there. He wasn’t employed; often pretending he was Art Vandelay the glamorous architect. When he was he would take naps under his desk, and return home to live with his parents…

Speaking of the past, one of my favorite gadgets as a kid was a little washing machine that actually washed Barbie clothes about halfway through before breaking…

I have recently done a kind of “plastic surgery” (Dave Ramsey) where in I only try to use my debit card or cash. The thought behind doing this, is apparently you spending cash innervates the parts of the brain that detect pain. For me that’s the debit card. That activates my pain centers in my brain more than cash. I think it does that for me because I will be able to see in real-time the debit coming right out of the checking account-ouch. I like the debit card because it tells me what I spent and exactly where I spent it without me having to write it down and I can make cool graphs and I’ll kinds of nerdy things that make my husband love me and buy me brunch:)

I needed to give coin a fair shot and thinking really how would I use this aside from the cool factor?

I admit the plan is a little bit elaborate…
1. Buy gift cards from plastic jungle
2. Buy only from Home Depot, CVS, and then maybe a few grocery stores and Victoria’s Secret for discounts of 2% 3% and up to 7%.
3. load THESE onto Coin instead of hassling with all these cards that come from plastic jungle that have a hard time at the point-of-sale of running through and we have to get out the plastic bag and there’s people behind me in line sighing….

It might also be a good place for the cards I really really never use like store cards because they never have incentives to use them. I’m not sure what they’re thinking in their business model. they send me coupons in the mail that I can’t read and aren’t good anytime anywhere any place.

There’s kind of a price to new and cool. Then again, how many times have I been the shopper on the receiving end of a snotty cashier at Victoria’s Secret having to call her manager because I was trying to use a coupon on my “newfangled” phone.

I don’t know if they will but won’t it be a hoot to find out?

Here’s a code to use to get $5 off the already slashed price of 50%off.
https://onlycoin.com/?referral=ETU5Bw9a