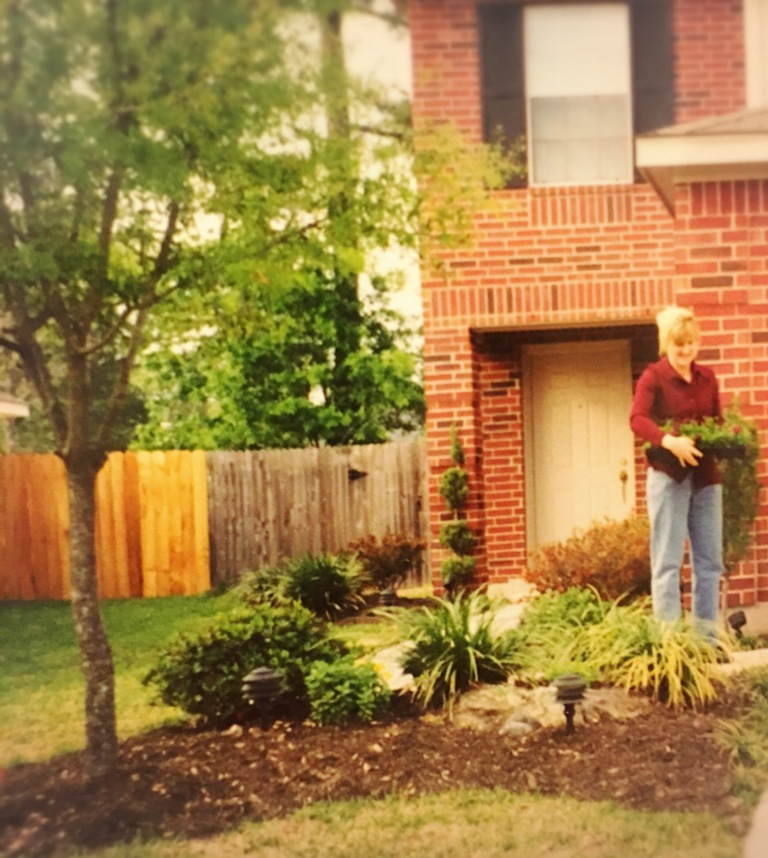 ﻿
﻿﻿Twenty years ago another letter from the Homeowner’s association arrived in the mail on a Friday night. It read “Cut Your Lawn or We’ll Kill You…a﻿nd your Dogs!” Something like that.

Homeowner’s associations often have the power to put a lien on your house. A piece of lawn out of place could mean legal action against you.

Saturday morning was sunny again in June and Texas Hot and Gulf of Mexico Humid at 9 AM. Mr EX had taken off to go fishing again.  I seethed.

I went to the attached garage where 2 cars barely squeezed in each night. Where a giant nutria rat had eaten my dough cow Christmas ornaments and geckos laid eggs that looked like leathery snake eggs in the first year. No air moved in that stifled place. It was the perfect incubator.

Underneath the workbench which served no real purpose other than to be In The Way, was the folded mower. She had been sleeping for 3 summer weeks while her owners waited each other out. I snapped the handle “C’mere you bitch! You have work to do.”

She wrangled upright as I twisted and set bolts and pins. I checked the fuel. Choke was ok. And I rolled her down the driveway where years before the body of a 2 foot coral snake had been.

The coral snake had been sitting atop the overfull laundry basket usually used each night by Mr. EX to fluff a shirt for work. Something told him to turn on the laundry light that night before reaching toward the pile of shirts and a little black tongue flickered. Then he recalled the rhyme about snake stripes “red next to yellow…KILL a fellow!” He screamed “Snake!” and ran upstairs. I called an exterminator who arrived at 1AM to our laundry room and picked through the underwear and then exclaimed “yep! That’ll keel ya as sure as look atcha…” And the snake hissed like the cobra it was then met its end with a shovel and was laid out on the driveway at 2AM for evidentiary photos on a Monday morning.

Green Bitch was a Sears EZ-Start mower chosen by Mr. EX. When the house and marriage was less than a year old, Mr. EX easily started the mower with a quick pull and happily kept our new little lawn tidy and nice. I certainly couldn’t be hauling heavy things. At 28 and 6 months after my wedding, I had a hysterectomy for adenomyosis, continuous bleeding and a benign tumor. I had a houseful of flowers and plants and balloons from well-wishers and felt immensely loved. Six months later an ovary burst from endometriosis and I chalked up another surgery during my fledgling career as a geologist.

I felt the June sun rip at the back of my neck. I mustered the strength of Sampson and puuuullled the start string. Green Bitch sputtered “No!” “You insolent piece of shit.” I spat “C’mon!” Sweat began to pour into my eyes by the fifth try and my language and anger got more colourful. Tears welled.

What was I going to do? Our credit cards were maxed and I had student loans and medical bills and car payments and a mortgage! I can’t hire a lawn service! I was a smart and responsible creature so how did I get here?! ﻿

I felt a tap on my right shoulder. It was my neighbor Scott “Can I help? Those things can be tough to start.” “Yes, please” I pleaded. I wondered how long and often he watched me struggle from his tidy house.

“Zwaaarrrmmm..” The Bitch was alive and I was off cutting the front lawn. It looked ok but needed edging. I proceeded to the backyard wooden gate and opened it. A whole other huge yard was waiting for its haircut. No more.

With that cobra-killing shovel, it took me until August to dig up the entire back yard of grass. Anger and resentment propelled me. I saved enough money to have half a truckload of mulch plopped in the very spot where the coral snake lay years before. And it took me until September to put all the mulch in place.