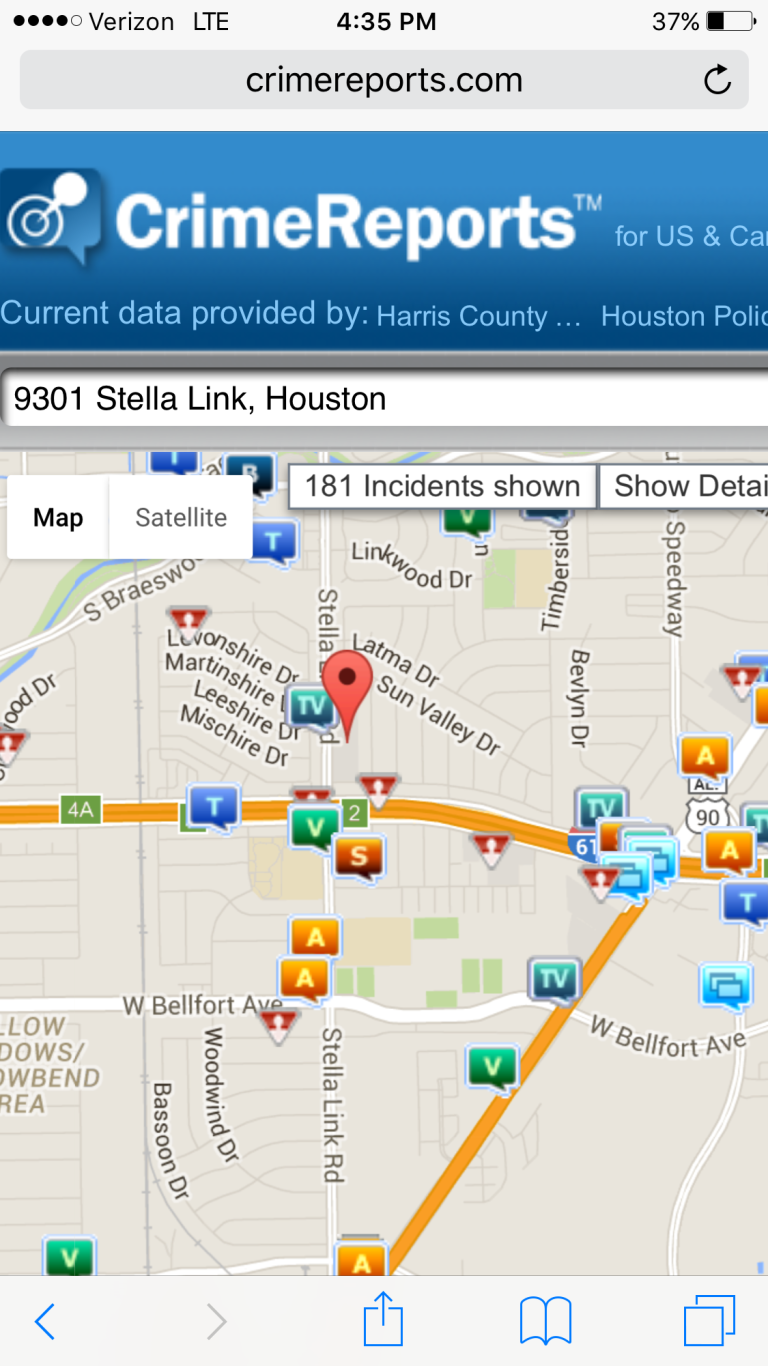 After my “adventure” of finding a Groupon lash place, Mr W was concerned: “I don’t like you going to dodgy neighborhoods.”

I thought that perhaps I could use my old crimereports.com website to help me in future endeavors. The app doesn’t work on my phone but the Spotcrime app does, though it does not show sex offenders like crimereports.com and seems too be less accurate.

Crimereports.com is still the most thorough and accurate and is a great tool when buying a home.

It seems we live in a dodgy neighborhood even though it doesn’t “look” as scary as the Groupon place next to the washeteria and dollar store from last week. On July 4th, we had a shooting in the morning just down the street (we drove past the yellow crime scene tape while going to the movies) and a double homicide just blocks north after the fireworks show the night.

I was curious, so I looked at 2 things:

* Last reported 30 crimes in each area for the month of June reported by the Houston Police Department (HPD) on Spot Crime app. It’s  thought that 30 is the minimum number of samples needed for good statistics (Central Limit Theorem).

*Assault with a deadly weapon 2/30

Hmmm.. I know Midtown can get crazy at night, let check crime reports.com. A 5 block radius around each area, month of June. When we talk about “high crime area”, were really thinking about stolen cars & personal safety (car theft and assault).
*Groupon area:

Hmmm..isn’t this interesting? Explains our condo insurance rate for sure.

It would seem that the home area is more car-theft prone but just as dodgy as the Groupon area; however; there is massive police presence at our home area and it’s “cute” with the lofts, tony restaurants and cobblestones. Just 20 years ago, no one dared go into this part of the city, now it is one of THE places to live. I still won’t venture out alone for a jog or bicycle ride though. The suburbs complain about the LACK of police in their area (I have heard of one woman being mugged in her front yard in a nice neighborhood whilst gardening).

Hey, we need the police downtown.

So, which place is really more dangerous? It would seem our home area. More incidents and more densely concentrated,  though the Groupon area felt creepier because it was a bit run down and unfamiliar. That’s a thing about Houston-even the nicest-looking places can be frought with crime.

I suppose the only way to gauge a Groupon before I go is to drive by it, see if my creepy meter goes up.

As a first-pass, I can look to see on google maps if there is a washeteria next door.