It had not yet been a year since divorcing, taking a new high-stress job in Dallas, where I knew no one.

as a first house.

The worst was coming.

(The bed is just behind the lamps.)

I cried every day.

I had looked for a condo to buy, but on a single salary, there was little I could afford. By the grace of God, I had learned some of Dave Ramsey’s budget guide: no more than 25% of take-home pay for housing. (I didn’t realise until much later that, including utilities I could have gone up to 35%).

In August, I got the dreaded phone call from the storage company :”the company has paid 90 days of storage, where do you want the contents of your house delivered?”

Over the summer, I calculated the worth of contents vs. cost of storage vs. the chances of me finding an affordable property in the next year. It made no sense to keep everything in storage. My stuff was maybe worth $5,000. Storing it for a year would cost me over $3000.

I think the guy choked on the other end of the line.

He was about to cry, it seemed.

At 730 AM, the tractor trailer showed up at the Salvation Army docks.

I had a paper with the listing of boxes I could pull as they came off. I chose about 5 of them.

Box after box, furniture after furniture came off the truck and disappeared into the thrift store. It took 5 hours. Each time, the unloaders asked “are you sure? This is really nice stuff…”

They protected me from a clueless person who was trying to get me to hurry and leave. “Leave her alone. This is all she has left in the world!” 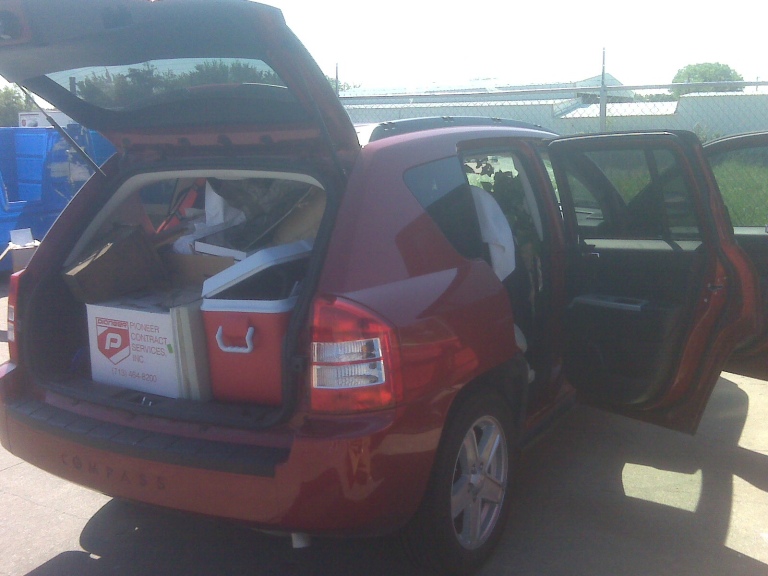 I still had my truth. The truth of not being defined by things, of sticking to a budget, hoping it would pay off someday.

The sheer weight and sorrow of all this “stuff” began to shed. A burden of hopes and dreams of a big house that would save a doomed marriage, of barbecues with friends who never came, of Christmases with family that never happened.

And wouldn’t you know, by chance, there was a small box of vintage baseball cards that was part if my ex’s “retirement plan”: Hank Aaron. Griffey Jr. Rookies…